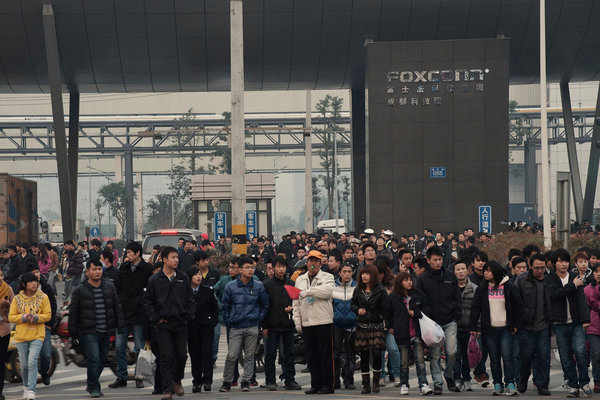 Foxconn workers leaving the factory at the end of the day shift.

Foxconn Technology, the company that manufactures Apple’s popular iPads and iPhones, has made substantial progress toward improving safety and other working conditions at three of its Chinese plants dedicated to making Apple products. But it has not yet achieved the most difficult goal: reducing the average workweek to the maximum allowed by Chinese law, a global monitoring group said on Thursday.

The auditors, supervised by the Fair Labor Association, said Foxconn was still working toward lowering the average workweek to the 49-hour cap. And labor unions at the plants that are supposed to represent the workers’ interests are still dominated by management, the group said.

Still, the average workweek has come down sharply from the typical 60 hours or more that has been common practice at the Chinese suppliers of Apple and other technology companies.

Although the auditors declined to be specific about the length of the Foxconn workweek, Apple has said that it has been working to reduce the long hours put in by workers at its suppliers, which are mostly in China.

In a statement on its supplier responsibility Web site, the company said for more than a million workers in its global supply network that it tracked in 2012, “the average hours worked per week was under 50.”

An Apple spokesman, Steve Dowling, declined to discuss the specifics of the Fair Labor Association audit, which he said was done independently of Apple. In a statement, Foxconn said the F.L.A. report confirmed the company’s recent improvements in its operations. “We will continue to build on that success as we work toward compliance with the F.L.A. Code,” the company said.

But Mr. Dowling said Apple has been working closely with its suppliers and conducting its own monitoring to improve conditions at the factories that make its products, and the company has posted public progress reports.

Foxconn, part of the Taiwan-based company Hon Hai Precision Industry, employs about 178,000 workers at the three factories inspected. It has about 1.2 million workers at plants making products for Apple, Hewlett-Packard, Dell, Microsoft and other technology companies.

Foxconn has been under intense scrutiny for several years because of working conditions inside its factories. Investigations by The New York Times, outside groups and Apple’s own supplier responsibility officials have found illegal amounts of overtime, crowded working conditions, under-age workers and improper disposal of hazardous waste. Industrial accidents have injured and killed Foxconn workers, and the company also experienced a wave of worker suicides.

Labor and consumer activists have pressured Apple, one of the most profitable companies in the world, to do more to improve conditions for the people who make its products. The monthly earnings of Foxconn workers making Apple products are currently about $ 500.

Apple joined the Fair Labor Association, or F.L.A., in January 2012, and asked the group to audit its suppliers, beginning with Foxconn. The labor group has periodically inspected Foxconn factories in Guanlan, Longhua and Chengdu since February 2012 and interviewed thousands of workers. Apple pays for the audits.

After the first inspection, Apple and Foxconn agreed to an action plan of 360 items to be completed by July 1, 2013. As of January, 98.3 percent of them had been achieved, the group’s report said.

Most of the items were “housekeeping issues,” said Auret van Heerden, chief executive of the F.L.A., in an interview Thursday. “Those things they plowed through.”

But Foxconn has also addressed more substantive problems, Mr. van Heerden said. For example, in fire safety, the company added more escape routes and cleared choke points after the auditors asked it to test the evacuation of buildings during shift change, when plants are most crowded. “We were, in a way, looking for trouble,” he said.

He noted that Foxconn has also overhauled many processes, including using robots instead of people to polish the aluminum backs of iPad cases and water to capture and dispose of the resulting dust. An aluminum dust explosion in May 2011 at Foxconn’s Chengdu factory killed three workers and injured more than a dozen others.

Critics of the F.L.A. and Foxconn said the most recent audit played down problems found by other investigators, such as unpaid overtime and Foxconn’s use of unpaid interns.

“Over all, the F.L.A.’s reporting on Foxconn continues to be unjustifiably rosy,” Scott Nova, executive director of the Workers Rights Consortium, a university-backed group that monitors apparel factories worldwide, said in an e-mail.