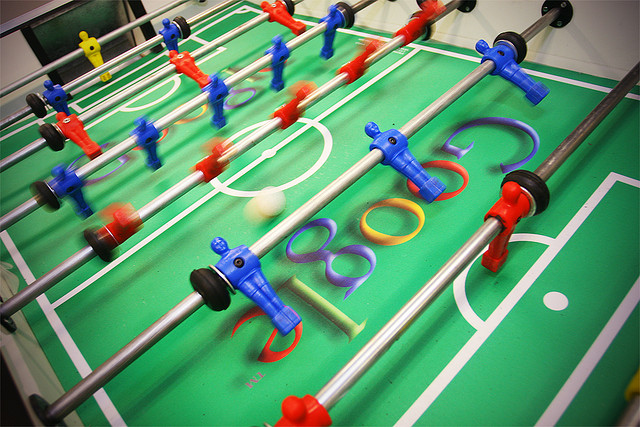 Google may have a reputation as a jaunty nerd paradise with a startup’s DNA, but the decision to lay off 4,000 Motorola workers reveals a full-grown company capable of old-school corporate severity. Photo: fore via photo pin cc

In his column posted today on Wired Business, Anil Dash praises the Surface tablet as a sign that Microsoft finally has decided to get ruthless in the right way: “I’m ready to embrace a big tech company that’s not afraid to get mean.”

Add Google to that list. Whatever the rationale, Google’s decision to lay off 4,000 people from its Motorola Mobility unit cuts against the company’s image as a do-no-evil nerd paradise. Not that layoffs necessarily qualify as evil, but slashing thousands of jobs doesn’t feel very Googley. It feels more, well, HP-ish. It’s an old-school move by a company that has tried relentlessly to define itself as a new kind of corporate giant, a bottom-line–driven decision that shows Google doesn’t just mean clever doodles and heated toilet seats. It means business.

The layoffs also come off as out of character because Google simply doesn’t lay people off on a scale like this. It cut 200 sales and marketing people loose in 2009, but that hardly counts especially considering the company continued to hire throughout the recession.

With its $ 43 billion in cash and steady profits, the 30,000-employee company is known for hiring, not firing. But Google had also never made a purchase like Motorola Mobility before. The $ 12.5 billion deal to acquire the 20,000-employee company with its own lengthy corporate pedigree should have shattered the illusions of anyone still wishfully thinking of Google as some kind of overgrown startup. If not, these layoffs should convince any remaining doubters that, whatever its work culture or consumer-facing image, Google counts as a full-grown corporation, which like any other will reach for job cuts as one tool among many when profits and shareholder confidence are on the line.

You could argue that these particular layoffs don’t count because they are happening within the Motorola subsidiary, which struggled before Google swooped in and wasn’t going to turn around simply because it was touched by a little Mountain View magic. In fact, these layoffs, which mostly impact Motorola employees outside the United States, are that magic. “These changes are designed to return Motorola’s mobile devices unit to profitability, after it lost money in fourteen of the last sixteen quarters,” Google wrote in its 8K filed with the SEC — cold, dry, hard numbers that signify a failure that Google does not intend to make its own. And so a big company makes a brutal, but what it sees as necessary, business decision. Yet a certain Googley tone creeps into the proceedings, if not in the company’s own name, in the SEC filing: “Motorola understands how hard these changes will be for the employees concerned and is committed to helping them through this difficult transition.” Total cost of its compassion, according to the company: $ 275 million in severance and related layoff costs.