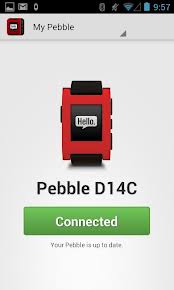 Get ready for a whole lot more Pebble. The smartwatch company just announced several software enhancements for the Pebble and a $ 15M Series A led by Charles River Ventures. Pebble is not going to sit around, scared of iWatch rumors. They’re plowing forward on their own accord and committed to providing the best platform possible for developers and consumers.

“We are pledging to support the developers hacking on Pebble,” stated Pebble CEO Eric Migicovsky told me in an interview. “We want to make the Pebble the go-to place for developers.” And with that the company released its first SDK last month and is following it up today with several big improvements.

The cash injection will be used to increase the company’s software engineering team’s headcount and allow the company to scale to meet still-growing customer demand. CVS’ Partner George Zachery is joining Pebble’s board of directors, a move that excites Pebble CEO Eric Migicovsky.

George is the one that shared our vision of wearable computing,” Eric told me a chat this morning. Several angles also participated in the round, but Eric indicated that Charles River Ventures funded the majority of the Series A. This round of funding joins the $ 375k the company previously received from four angel investors, including Paul Buchheit, a partner at Y Combinator, and Tim Draper of venture capital firm Draper Fisher Jurvetson. And don’t forget about the $ 10.3M Pebble raised on Kickstarter.

“The tremendous response we received from Kickstarter backers validated our belief in the value of a smartwatch as a wearable computer, but also in the value an open platform brings to truly personalizing the watch to their daily activities”, said Eric Migicovsky, Pebble’s founder in a released statement today. “This new investment will help us build out the Pebble development ecosystem and deliver on Pebble’s extraordinary potential.”

Pebble is still working on fulfilling the 85,000 orders placed on Kickstater. To date 70,000 have reached early supporters. “It’s pretty crazy thinking there are 70,000 Pebbles out there,” Eric told me proudly. “Tens of thousands” of additional orders have been placed, Eric said.

The company is aiming for retail availability in four to six months.

Pebble also announced several software enhancements for its smartwatch today. The SDK, which the company appropriately calls the PebbleKit, enables 3rd party apps to send and receive data from the smartwatch.

This two-way communication is a huge step forward for the smartwatch, allowing the watch to display a large variety of information including weather and sports scores or even act as a remote control for the phone itself. Until now apps were limited to basic functions like just display a watch face or displaying a simple game of snake.

Since releasing its initial SDK back in April, Pebble states the kit was downloaded over 8,000 times, resulting in over 5,000 unique watchapps with 300,000 installs during the last month. Owners are clearly hungry for more Pebble features.

The Pebble was supposed to usher in a new era of productivity by strapping a communication device to our wrist, but the initial feature set was limited even with the first SDK release. However, Pebble is keeping at it and today’s funding announcement and software development release should result in a big harvest of fresh apps.

“Everyone is talking about wearable devices,” Eric explained. “We’re very happy that pebble is a platform people can build on today.”

Wearables is the next big thing. There’s no denying that. Even if Apple skips the iWatch device, Google Glass and others are pushing forward the thought of wearable computing. But the Pebble is here today and developers have latched onto the platform, outing custom watch faces, games, and apps. With the Pebble, the future is here now.