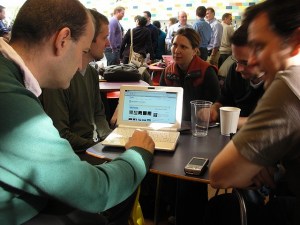 Drew Olanoff has over 10 years of marketing, PR, customer service and support, relationship building and management, product management, and technical support experience in multiple verticals. Online, including mobile. He prides himself on being a connector. Connecting people, stories, information. He has worked under some amazingly talented and gifted PR pros while working for startups as a “Director of Community”,… → Learn More

As you know, the devastation of Hurricane Sandy has hit millions. Many turned to Twitter to discuss what they were going through. Today, the company shared some interesting facts and numbers having to do with Hurricane-related activity on the site.

What does this tell you? Twitter was a fine replacement for cell phones and landlines that weren’t working. The interesting thing about these numbers is that the company dug deep down to see exactly what people were talking about.

The context is what matters here, not the numbers:

As these statistics show, people weren’t only tweeting, they were consuming information. People were using the search and discover functionality, along with trending topics, to make sure that they had all of the information they needed to navigate their way through everything that was going on on the East Coast. Mother Nature causes quite a scare when these things happen, and having a readily available set of information can calm those nerves.

The fact that the Red Cross got so many mentions is very heartening. That means that the “system” is working, and that Twitter could one day become a national broadcast system in the case of emergency. Yes, it seems like this is a stretch, but it’s not when you really sit down and think it through.

Luckily, from an infrastructure perspective, Twitter was able to stay up throughout the peak of all of this activity. Unfortunately, other sites weren’t so lucky. Even the stock market suffered a bit because of the horrific weather.

Facebook also saw a similar spike, becoming a place for people to let loved ones know that they were “OK.” The company was even able to include the Red Cross in its new Gifts For Charity initiative.

From my own personal experience during the storm, and even now with the recovery, many of my friends and family reached out to me through Twitter to let me know that they were okay. Some even shared a bit of humor throughout the ordeal.

Twitter, founded by Jack Dorsey, Biz Stone, and Evan Williams in March 2006 (launched publicly in July 2006), is a social networking and micro-blogging service that allows users to post updates 140 characters long. Twitter “is a real-time information network that connects [users] to the latest stories, ideas, opinions, and news.” The service can be accessed through a variety of methods, including Twitter’s website; text messaging; instant messaging; and third-party desktop, mobile, and web applications. Twitter is currently available in…